The original Danish recipe is unchanged since 1924. Back then as well as today, the secret of this elegant spirit is based on exclusively using extra fine filtered alcohol and specially selected spices. In particular, caraway and dill are responsible for its extraordinary taste. As of today, Malteserkreuz has more friends than ever and you cannot imagine classic seafood dishes without this Aquavit – it is Germany's No.1.

There was bustling life in the German capital, when Malteserkreuz Aquavit was launched in 1924 in Berlin. People had left both the aftermath of the war and the inflation finally behind them, and welcomed everything what promised pleasure and enjoyment. Never before the heartbeat of the city went faster than in the "roaring twenties". It was the time when peopled shimmied in festive dance halls, when ladies wore bob and could allow themselves luxurious items with a good conscience again. The first Malteserkreuz bottles came hand-tagged, wrapped in white silk paper wrapped and neatly packed in wooden crates – and went to Berlin’s prestigious Eden and Adlon hotels. But quickly the noble Aquavit from the Charlottenburg district conquered Berlin’s entire gastronomy and became the lifeblood of a rekindled vitality.

Very trendy is the "new Nordic combination", also known as "Viking-style". The so-called “Wikinger-Gedeck” served together with a cold beer and an ice-cold Malteser Aquavit. 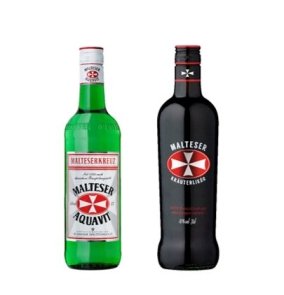